WHAT IS NEW ON THE CIVIL SOCIETY AGENDA IN BULGARIA?

Legislative initiatives to change the legal framework for CSOs

On July 1, 2020 a group of MPs submitted to the National Assembly a Bill for amending and supplementing the Non-Profit Legal Entities Act. The Bill provides:

On October 14, 2020, the Special Rapporteur on the Rights of Peaceful Assemblies and Associations, the Special Rapporteur on the Situation of Human Rights Defenders and the Independent Expert on Protection from Violence and Discrimination Based on Sexual Orientation and Gender Identity sent a joint letter to the Bulgarian government according to which the Bill will create a hostile environment in the country for CSOs receiving funds from abroad, and will be in violation of Art. 22, paragraph 2 of the International Covenant on Civil and Political Rights ratified by Bulgaria in 1970.

Also, the delegitimization of human rights activities (most often carried out by CSOs) related to the sources of funds was condemned by the UN Human Rights Council in Resolution 22/6.

It is also noted that a 2017 Hungarian law providing for such measures was declared discriminatory by the Court of Justice of the European Union in June this year. 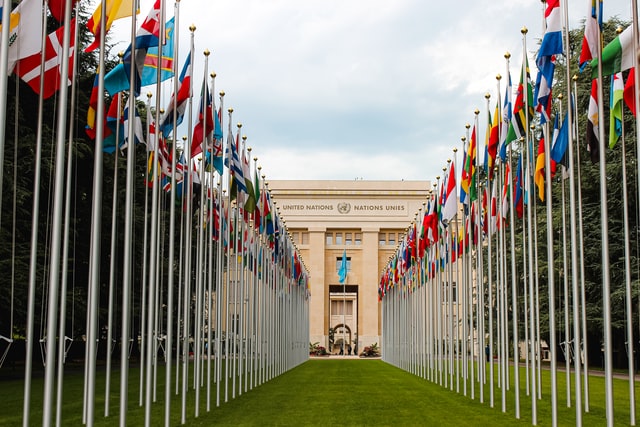 On October 15, 2020 the Council of Ministers submitted to the National Assembly a new Bill for amending and supplementing the Non-Profit Legal Entities Act with only one proposal - extension of the term for pre-registration of CSOs into the Registry Agency from December 31, 2020 to December 31, 2022. The bill was not consulted under the Law on Normative Acts. The Council of Ministers refers to a text from the Law on Normative Acts, which makes it possible not to consult and make a preliminary impact assessment when the bill is related to the prevention and elimination of the consequences of force majeure (as was the case of the state of emergency).

BCNL prepared an opinion in support of the proposal to extend the pre-registration deadline. In its opinion to the Legal Committee of the National Assembly, BCNL proposed two additional changes to be adopted in order to eliminate specific difficulties that civil society organizations experienced during the state of emergency: 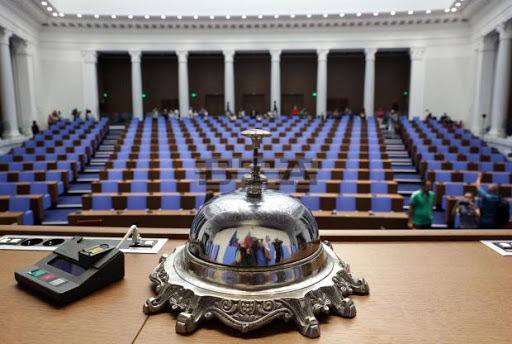 Since the end of the initial state of emergency in relation to COVID–19 and the easing of the anti-pandemic measures in June, 2020 Bulgarians took to the streets of Sofia and other towns to protest one of the latest acts of over-construction on the Black Sea coast. Despite the fact that initially the protests were instigated by the actions of some political figures, now they have no clear leadership, although several CSOs are mainly organizing events and actions in its scope.

Despite the participation of different groups and people with variety of views, the following demands can be outlined as common for the majority of the demonstrators:

For over 100 days now, the protests continue to question not only some institutions but the way the state is being governed. 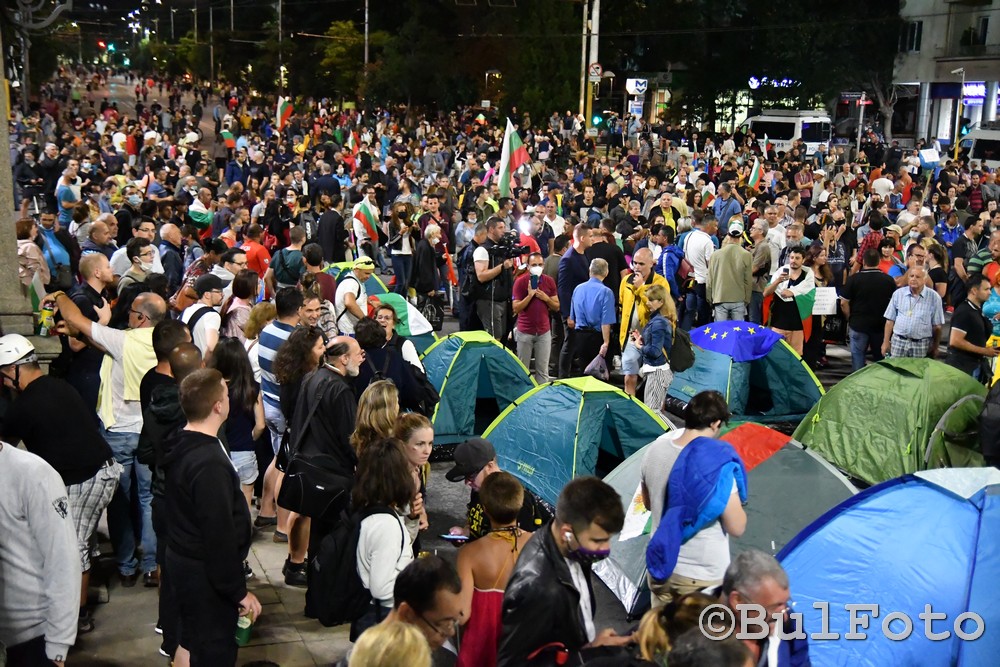 The government, pro-governmental media outlets and the prosecution are promoting a narrative aiming to delegitimize the protest. The main points of this narrative are:

In all that time anti-NGO rhetoric has been promoted. Even the Deputy Prime Minister and Minister of Defense Krassimir Karakachanov publically criticized the protests with the words:

“You cannot ruin the state in the name of several Soros NGOs and parties outside the parliament that cannot come to power. And in the name of what? To bring me gay marriage and create a gender republic for me. I'm sorry, I don't agree."

After a public outcry instigated by police brutality during the protest on 10 July, the demonstrations continued peacefully with some minor and isolated incidents. This, however, changed on the 2 September when a big demonstration alongside the return of the Parliament for the first time after a month–long vacation. The events on 2 September might be characterized as a failure of the Bulgarian authorities to guarantee the full enjoyment of the right to peaceful assembly.

According to eyewitnesses the majority of the policemen deployed to guarantee order during the protest were lacking proper identification (ID numbers on their uniforms) making it difficult to identify possible perpetrators of police violence. On the other hand, some policemen were spotted wearing insignias (which are not part of the official uniforms) depicting skulls and even writings such as “one shot, one kill.” A policeman was also caught on camera wearing brass knuckles. This behavior and the fact that policemen from all kinds of task forces – from traffic police to special task force meant to investigate animal abuse, were deployed in the protest raises the question if the

No anti-epidemiological measures have been applied to disperse the protest, so far.

We continue to thoroughly watch out for potential violations of our constitutional rights and we keep informing you on the legitimacy of our acts as citizens as well as the acts of those who govern. Namely the attempts of violating the right of peaceful assembly drew international attention to the matter.

BCNL prepared a detailed material on the topic which was published in the international and independent platform for political, legislative, social and economical topics - Civic Space Watch 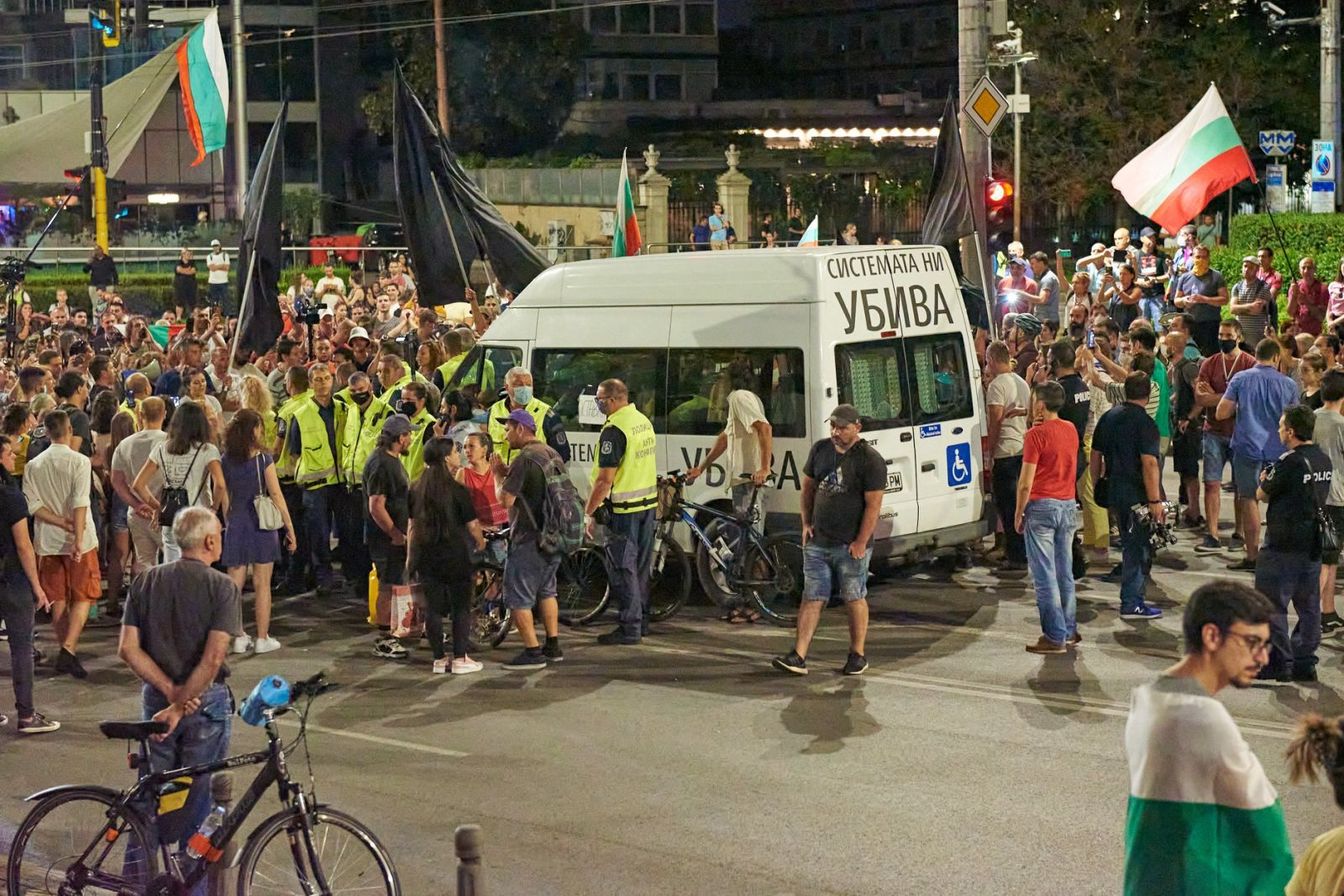 Following a long period of targeted attacks against the non-governmental sector and attempts to erode its reputation, the National Representative Survey conducted by Alpha Research in late June 2020 (one month after the end of the COVID-19 emergency situation) shows, at the first glance, surprising outcomes – growth in the support for CSOs which was registered within a broad range of comparative indicators included in the survey. An increase in the assessments for NGOs has been established in 3 key areas – contribution to the development of the society, thrust in NGOs, efficiency. The results for all three indicators mark a rise by 10% compared to the 2018 survey.

Several factors have had the strongest impact on this positive dynamic of the public attitudes – the accumulation and the broadening of the geographic scope of the stable local CSOs over time; counter-mobilization of the strongest NGO supporters in response to the attacks against them; breaking out of the scope of niche policies during the coronavirus pandemic, and reaching out to broad social groups for the sake of overcoming the health and social crisis which was existential to everyone.

The survey concludes that the improved image and trust in CSOs have resulted from both the internal mobilization of the groups that directly identify themselves with CSOs (i.e. the nucleus with a strong response, but small in size) and the assessments of the wider periphery that has usually been left outside the range of the predominant topics of interest to the majority of CSOs.

You can read the whole Survey here 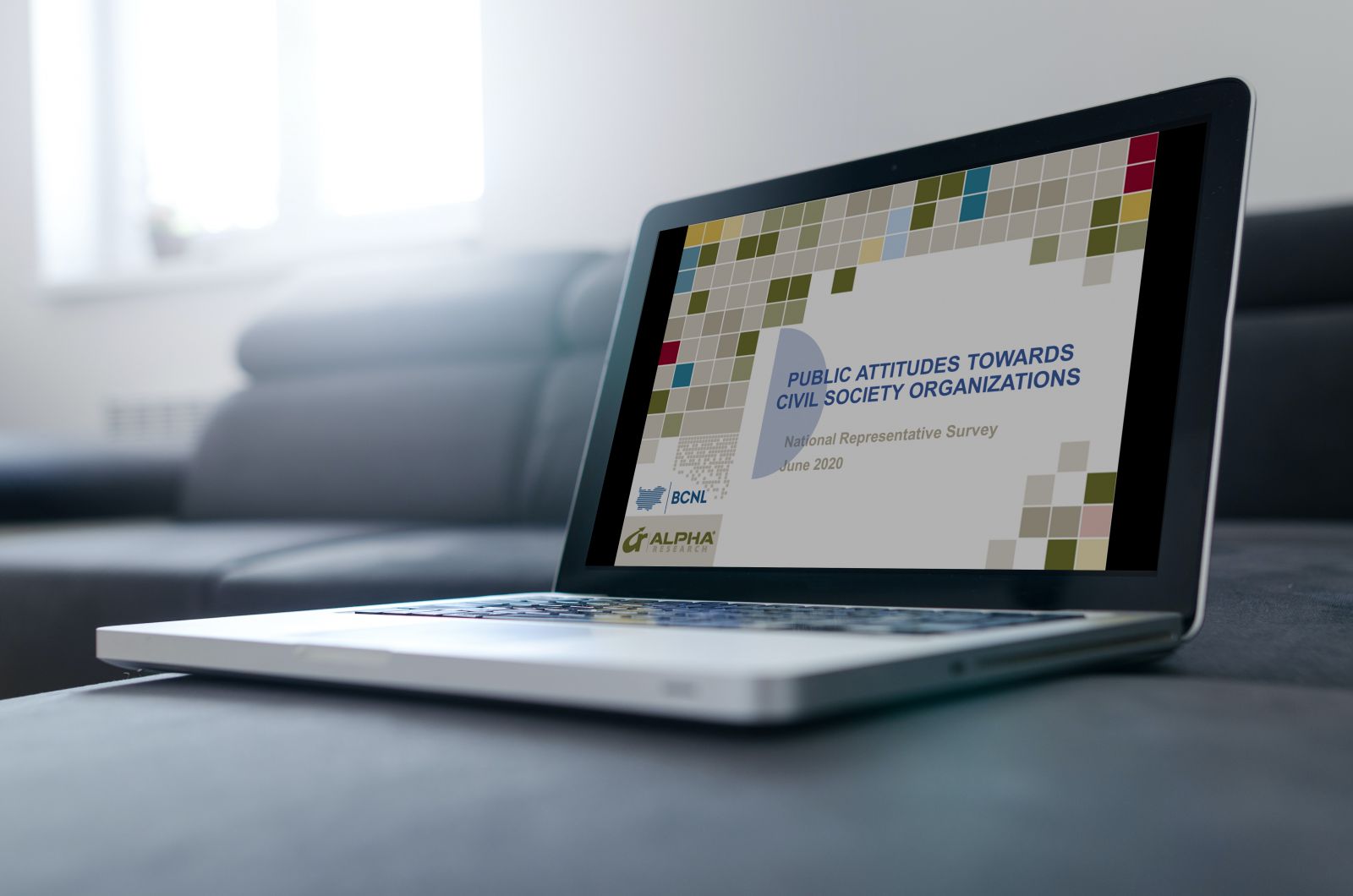 In September 2020, we presented the 2019 Index for Sustainability of NGOs in Bulgaria.

The 2019 Civil Society Sustainability Index for Bulgaria is 3.5 (developing sustainability) which means a deterioration compared to the previous year (3.4 for 2018), but the negative trend is observed for the second consecutive year.

There is a decline in 2019 in five of the seven monitored areas: Legal Environment, Organizational Capacity, Financial Sustainability, Advocacy and Public Prestige. The areas of Sector Infrastructure and Provision of Services are without development.

Among the main factors for that is the negative public campaign against the non-governmental sector in Bulgaria. The growing polarization in a society in which informal groups and conservative organizations question the legitimacy of NGOs for the protection of human rights, which leads to a deterioration of the image of NGOs, their organizational capacity and advocacy.

The index shows a steady trend of deteriorating financial sustainability of NGOs over the past five years. The reason for this result is both the withdrawal of more large foreign donors and the deliberate neglect of the civil sector by the government. Political attacks on CSOs have escalated to absurdity, and the assembly of a whole propaganda machine against the sector has also had a negative effect - the index shows a significant decline in philanthropy and volunteering, without which civil society is unviable. And the First Annual Report on the Rule of Law in the European Union speaks directly about "narrowed civil space in Bulgaria", given the proposed restrictive legislation for NGOs.

You can read the whole Index here 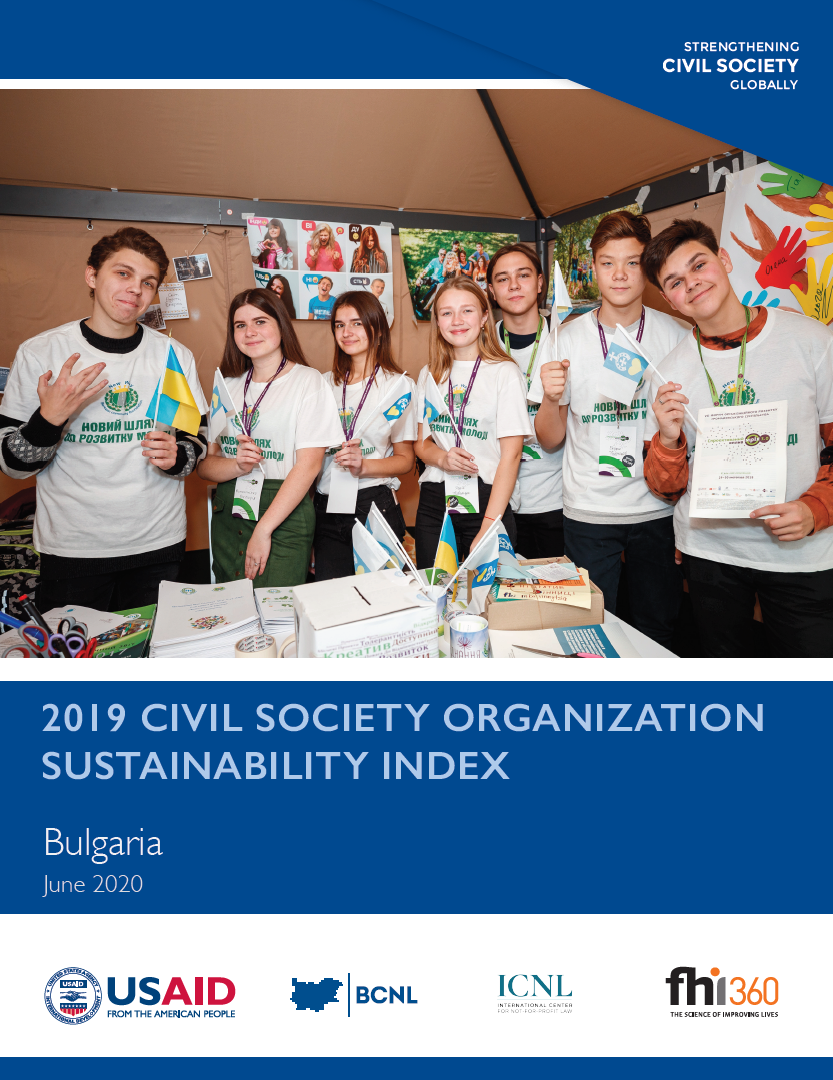